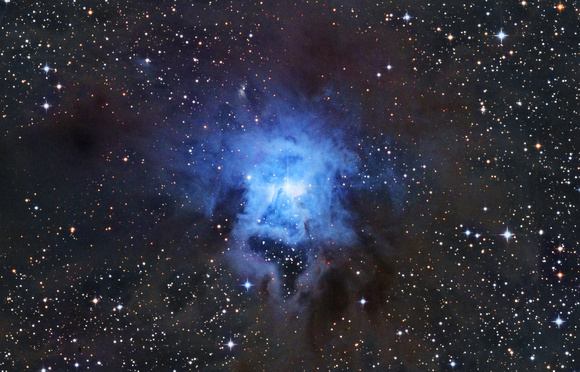 NGC2703- The Iris (reflection) Nebula - June 2021
Planewave CDK12.5/ASI6200MM/LRGB
The Iris Nebula, NGC7023, takes a break from the typical red Ha dominant, emission type of Nebula dominant in astrophotography. Instead, NGC7023 is a reflection Nebula. The blue part of the nebula is reflected light from the central bright star. Rather than ions, the dust "cloud" that is seen is made of up molecules and heavier atoms? that are not emmitting light according to the spectral emission lines. Rather, light is primarily bouncing off them and generally not causing electrons to change orbitals.
Where there is no incident light, the cloud appears dark, even blocking out stars that surely exist by it. There are holes in the cloud, giving a peak of the stars behind the nebula.
© RASC Victoria Centre
Powered by ZENFOLIO User Agreement
Cancel
Continue