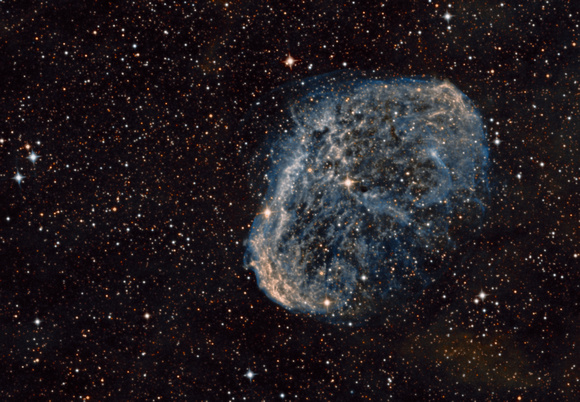 Crescent Nebula, NGC6888 - June, 20217nm NB ZWO filters - Televue 127is, ASI6200MM, A-P 1100GTO-AE, SHO Palette
The Crescent Nebula represents a similar structure as a Supernova remnant, except it is not. Rather, it is the result of gases ejected when a star became a red-giant. This star subsequently because a Wolf-Rayet, whose strong winds now collide with the slower moving gases causing them to become emission nebulosity.
Footnotes:

This nebula is actually surrounded by significant background nebulosity too, and I was frustrated by existing stretching tools to show this background, while avoiding the bloating of stars.

This frustration led to me thinking of better transforms with which to apply an image stretch. Eventually this led to the GHS script that was released in December, which can do a much superior job. A rework of this image is still pending.
© RASC Victoria Centre
Powered by ZENFOLIO User Agreement
Cancel
Continue