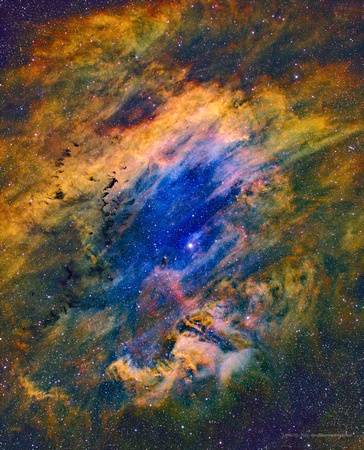 SH2-119 The Clamshell Nebula (Cygnus) in NB - Aug 2022
Televue 127is - AIS6200MM
A-P 1100 GTO AE, Antlia Pro 3nm NB filters
H,S,O: (3 x 30 x 660ss exposures, Bin 1, Gain 100)
Total Integration Time = 16.5 hours
THe Clamshell Nebula is a large nebula complex (150 x 60 arcmin) in Cygnus, resembling a clam, but maybe an oyster (I see a pearl - 68-Cygni) or a scallop might be better. No matter the bivalve, it lies about 2 degree East of the North Americal Nebula
Conventionally isn't considered a great narrowband target due to a weak OIII signal, but I found the signal significant within the clamshell even though it does reveal any details. I really like this image, despite the less than ideal FOV, because of the sense of movement it suggests - from within the clamshell to the upper right caused by the linear signals in Ha and SII. I also enjoy the "watercolour/ink" effects of the dark nebulosity along the clamshell edge.
The starfield is very rich over the clamshell and it was a challenge to show it, without have it dominate the nebulosity and making it appear too noisy. I originally was intending to use RGB stars, but my RGB integration time was too short, and I was missing a spacer that caused these stars to be too misshapen. Instead I got creative using HOO stars instead. I adjusted the blue star signal with a little GHS stretch, and then used photometric colour calibration (broadband selection) on the NB image to get close to natural star colour. Then I used a multistep process to transfer the stars over to the starless SHO image. The resulting stars are pretty close to natural, even if the nebulosity is in false-colour, Hubble palette.
I am also getting increasingly ok with leaving green in my images.
© RASC Victoria Centre
Powered by ZENFOLIO User Agreement
Cancel
Continue