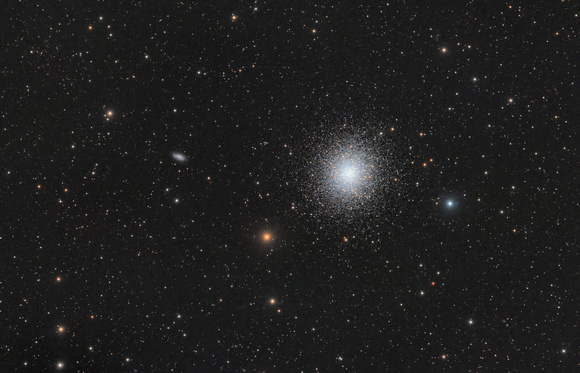 M13 Hercules Cluster and Area - Aug 2022
Televue 127is - AIS6200MM
A-P 1100 GTO AE, Antlia Pro LRGB
L (39 x 360s exposures, Bin 1, Gain 0)
R,G,B: (3 x 25 x 120s exposures, Bin 1, Gain 100)
Total Integration Time = 6.4 hours
Processed in Pixinsight
I had noticed a long time ago that I was missing globular clusters from my portfolio. I was also curious how well I could resolve the core with my refractor. This image is the result.
M13, discovered by Edmond Halley in 1714, but was only found to actually be made up of stars when telescope technology advanced to resolve them 65 years later. There are over a 100,000 stars in the cluster and there are over 100 such globular star clusters orbiting within the Milky Way. The Hercules Cluster is considered the finest/largest in the Northern Hemisphere.
I wonder if, on an earth-like planet in the middle of the cluster, if it would be bright day or night, or even if you could see past the cluster due to seeing/diffraction constraints. That might make the universe look at lot smaller.
Interestingly, the Hubble image can see between the stars and through the cluster itself.
I also found the NGC6207 galaxy very interesting. It looks at first like I resolved a central "blue-white" core of this galaxy, but in fact this is a foreground star. Nonetheless, I find this galaxy cool. There are also many smaller galaxies visible in this image (more galaxy hunting!), particularly in the upper half.
© RASC Victoria Centre
Powered by ZENFOLIO User Agreement
Cancel
Continue