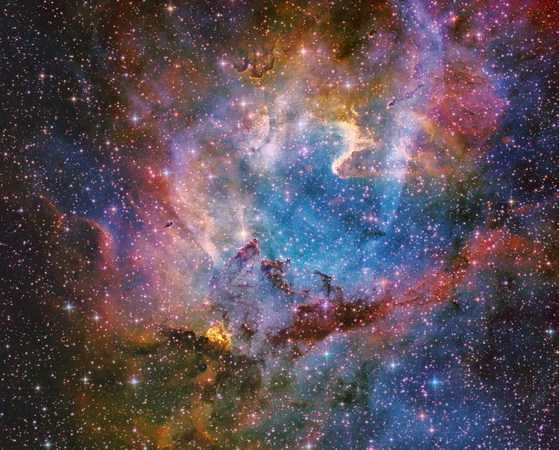 LBN471 - The Waterfall (Lion Nebula) in SHO w RGB Stars (Cepheus) in NB - July 2022
Planewave CDK12.5 - AIS6200MM
A-P 1100 GTO AE, Antlia Pro 3nm NB filters
H,S,O: (3 x 28 x 330ss exposures, Bin 2, Gain 200)
R,G,B: (3 x 24 x 120s exposures, Bin 2, Gain 100)
Total Integration Time = 10.1 hours
The Waterfall is part of the Lion Nebula star forming region in Cepheus and is lit up by some very massive stars, include Wolf Rayet. I was inspired by Eric Coles image of the same subject matter (Eric's is much better though), It is a very interesting combination of emission, dark and reflection nebulosity, with many interesting features and gas fronts.
I wanted to further my investigation of colour using the SHO palette and try out another technique for getting RGB stars into an SHO image. I added a lot of contrast and a lot of colour saturation to the image to make adding the RGB stars more challenging. The technique I used was to use a Starnet Lum starmask to first replace the background colour of the SHO image with that a starless RGB image - just where the stars were. Then I added the colour version of the starnet starmask to add the stars back in. In this way I managed to better retain the actual RGB star colour, at least I think I did.
Unfortunately, I did get some unwanted noise is some parts of the image that I figured would be too destructive to get rid of.
© RASC Victoria Centre
Powered by ZENFOLIO User Agreement
Cancel
Continue