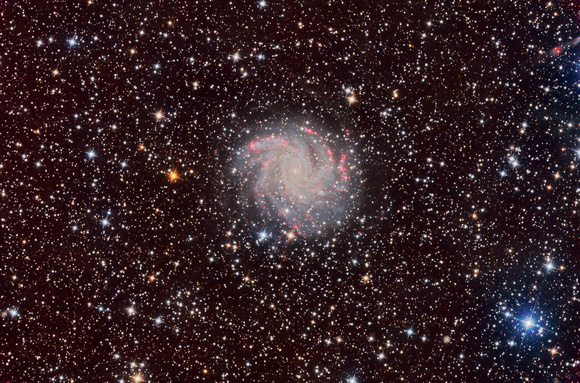 NGC6946 - September/October 2021
Planewave CDK12.5, ASI6200MM, A-P1100 AE Mount
L(24x120s),RGB(3x24x150s)Ha(24x660s), Gain=100, B1x1
Pixinsight processed.
The Fireworks Galaxy is considered "nearby", and 10 million light-years distant. It is notable for have a large portion of active star forming regions and a high frequency of super-novae. Since 2009, 25 supernova have been recorded in this spiral galaxy.
A closeup of this image reveals, from Ha data, that one errant arm of the galaxy extends from approximately 3 o'clock on the galaxy to almost the top of the image.

Stretching was done using a new Pixinsight script developed by Mike Cranfield and myslelf, employing the Generalized Hyperbolic Equation I sent around. Soon to be released - I will keep you posted.
This galaxy,
© RASC Victoria Centre
Powered by ZENFOLIO User Agreement
Cancel
Continue