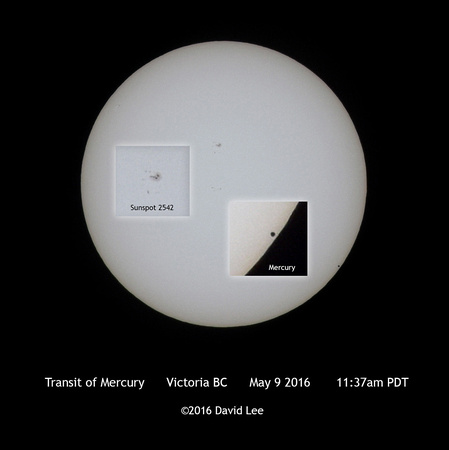 It was an early morning for most of us as we carried gear out to the platform at Mt.Tolmie. At 6am the Sun was just breaking through the clouds when we saw the first glimpses of the small planet. Already in progress the transit was the event we were all hopeful for given Victoria's propensity for changing weather dashing the hopes of astronomers.

All was good, the public started joining us as early as 6:30 and there was a steady stream, Sid estimated over 200 people had views of the transit through the morning. I was set up with the Televue Pronto for viewing and my Nikon D7200 with a lens of equivalent focal length to 420mm for imaging.

On the face of the Sun there were numerous sunspots. One of the largest, Sunspot 2542 almost appeared as a minature version of the Pleiades.

This image is from the egress of the transit. This proved to be a very exciting part of the event. During the transit the small planet was lost in the vast space of the Sun but nearing it's exit the dark shadow of the planet appeared almost larger.