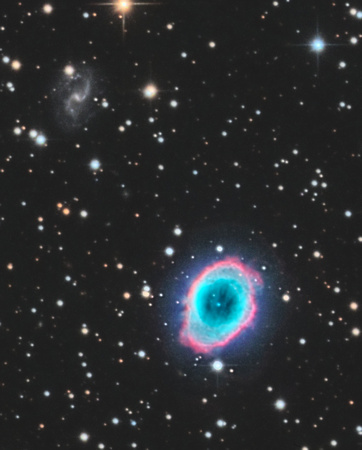 M57 Ring Nebula Closeup - May 2021
Planewave CDK12.5 - AIS6200MM - LRGB filters - AP1100GTO
Thanks to John McDonald, Joe Carr, and Brock Johnston for your help in extracting the detail in the image. Any mistakes, however, are entirely my own.

This is a closeup of the M57 planetary nebula, the "Ring Nebula" I included this closeup in the gallery because it is easier to see the actual details I was trying to capture in LRGB: The outer halo of nebulosity (easy to capture with narrow band filters, less so with BB), the ragged outer edge of the nebula, the central dwarf star (mag 15.75), the banding of gasses around it, and the spiral/helical forms further out. I am very happy to have captured these details in broadband light, given that the resolution is at the Dawes limit for the aperture of this scope - 0.3"/pixel.
The white dwarf in the centre was once a sun-like star that eventually spent its hydrogen fuel and became a red giant. Later, instabilities caused it to blow off its gases in one or more pulses (nova) and these gases became the nebula. The star itself shrank to about Earth-sized, but became a very hot white dwarf, creating heavier elements and strongly emitting UV light that in turn, lights up the nebula itself. in a few billion years, fusion will end, the star will cease emitting UV, and it will become a dead, black dwarf. So now is the ideal time to take an image!
Also in the photograph is IC 129 Spiral Galaxy to the upper left (and way behind) the planetary nebula.
© davepayneastrophotos
Powered by ZENFOLIO User Agreement
Cancel
Continue