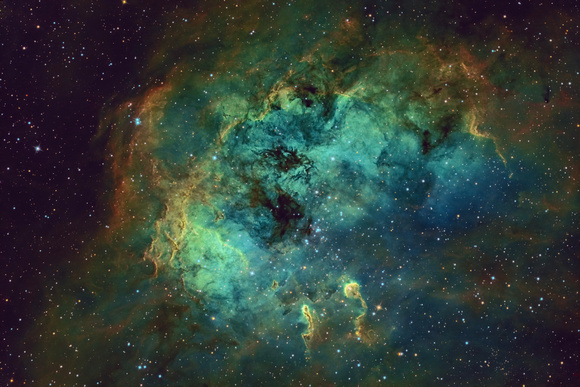 IC410 -The "Tadpoles" Nebula/Cluster in SHO w RGB stars (Auriga) - Oct 2022
Planewave CDK12.5 - AIS6200MM
A-P 1100 GTO AE, Antlia Pro 3nm NB filters
H,O: (2 x 45 x 360s exposures, Bin 2x2, Gain 200)
S: (1 x 45 x 420s exposures, Bin 2x2, Gain 200)
R,G,B: (3 x 33 x 180s exposures, Bin 2x2, Gain 100)
Total Integration Time = 19.2 hours
The Tadpoles are yet another stellar nursery, along the same lines as the Elephant Trunk, and Rosette nebula available in this gallery and elsewhere. In the middle of such nurseries, are generally found open star clusters of young stars that are actually composed of the nebular material itself. Once the stars form, however, they blow away remaining material through winds and radiation. This radiation is also adsorbed by the material, and then re-emitted in a colour (frequency) related to its composition, and finally captured spproximately 20,000 years later by the camera.
Near the centre/bottom of the image you can see two "structures", resembling the namesake "Tadpoles". These are similar to the "Pillars of Creation" of Hubble/JWST fame found in the Eagle Nebula. The heads of the tadpoles are facing the stars formed by the young, hot star cluster, and are very bright due to the radiation hitting them head-on. These tadpoles heads are likely denser and heavier than the material surrounding them, which has already been blown away further out by the stars. Interestingly, the heads shield material behind them (within the "tadpole tails"), keeping it cold and dark - conditions that are needed to form addtional stars possibly in the future (or at least what the future was 20,000 years ago). To see what the whole structure looks like from behind the tadpole heads, check out the dark patches / nebula in the centre of the structure. This is being shielded from the nebula / star cluster along our line of sight and thus appears, well, cold and dark. When it is cold and dark, gravity will cause the material to eventually coalesce enough to ignite fusion and create a new star.
The SHO palette uses filters that specifically capture the frequencies emitted by hydrogen, oxygen, and sulphur and the quantities can be surmised by the hue - hydrogen is everywhere but dominates in the yellows and greens. Red indicates the presence of sulfur ion (S+) emissions, while blues indicate oxygen ions (O2+). The exception to this rule is that the stars themselves have been left their natural colours is a processing trick.
The brightness is related to the total emissions given off both by these elements and also broadband emissions give off by the stars and reflections that happen to be of the right frequencies/wavelengths.

Postscript: My wife (a real artist) asked me to make the nebulosity dimmer and the stars brighter and this is the result. Same done on the NB_RGB version.
© RASC Victoria Centre
Powered by ZENFOLIO User Agreement
Cancel
Continue