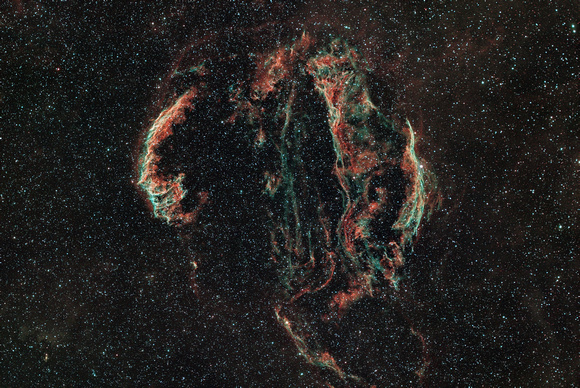 The Cygnus Loop (W78 or Sh-103) - Sep 2022
Williams Optics Redcat APO 51 - ASI2600MC
Celestron CGEM II, IDAS NBZ Nebular Booster Filter
51 x 540s exposures, Bin 1, Gain 100;
Total Integration Time = 7.7 hours
Over a year ago, after taking some images of Pickerings Triangle and the Eastern/Western Veils I wanted to see if I could put together the structure of the whole supernova remnant that is the Cygnus Loop. It should be somewhat spherical, as unfocussed explosions should be, right? It didn't looks so from the Veils. It is only by looking at wide field images on the internet was the roughly spherical shape revealed. The expelled material from the supernova has actually morphed from spherical to a sort of torus capped at either side by the Eastern and Western Viels. I would like to know if the current shape is due to the asymmetry of the super-nova itself, the influence of radiation from other stars, variations in interstellar material that built up at the shock front, or all three. In any even, I vowed at the time, to return to the Cygnus loop to capture the whole thing in one image - at the time I thought it would be via a mosaic...
Due to a glitch in my CP4 controlling board for my main mount, I had to send to Astro-Physics for repair (I love this mount, and thankfully the controlling board is separate from the mount itself!). So I dug out my Celestron CGEM II mount (which is a nice mount too, just seen better days and can't bear heavier loads), my portable Redcat telescope and ASIAIR Pro device, niether of which had yet seen light. Together they proved to form quite the imaging rig and the pixel scale showed that I should be able to capture the entire loop in one frame. (I will skip the part about needing to learn an entirely different system and a couple of clear nights wasted).
There we many challenges in processing this image: - the rich starfield naturally overwhelm the structure of the loop; the tendrils of Hydrogen and Oxygen emmission and other require high resolution; and there are lots of dim features, such as the shock front just in front of the Eastern Veil (left) and other dust, that I wanted to bring out. I really had to make full use of my Pixinsight tools to bring it together.
The shock front in front of the Eastern Veil was revealed to me through an amazing image posted by Randy Lindstrom on Astrobin. The Cygnus Loop itself is also essentially made up of shock-fronts. Shock fronts are created when material behind is moving faster than material in front, causing it to concentrate at the leading edge of the direction of flow. At a stationary point, a wall of material, or dramatic step change would be seen passing. This concentration or wall of material would seen as a tendril when seen edge on, and fuzzier/dimmer when viewed obliquely. I tried to show the dim interstellar material in the background that will someday be influenced by continued expansion of the supernova, should it not be too diffuse by then.
As a bonus, I found a small galaxy in the lower left of the image.
© RASC Victoria Centre
Powered by ZENFOLIO User Agreement
Cancel
Continue