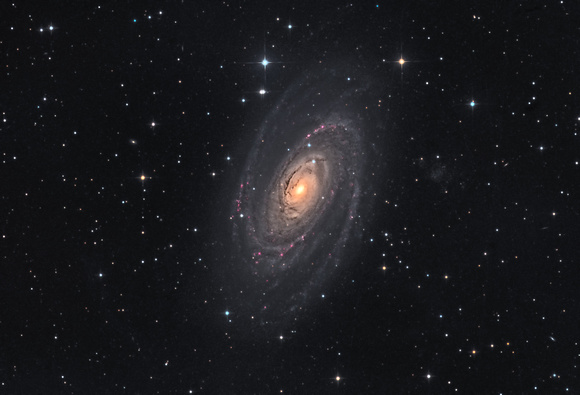 M81 didn't get any respect from me this spring, as I kept using it to "finish off the night" after shooting other galaxies. Since it is in Ursa Major, it is alway up, and generally pretty close to it apogee in the early hours of the morning so it has been ideal. The frames were a mixture of seeing conditions and moon brightness. In addition, early in the spring I would settle for 3 or 4 frames per filter using low gain. Later, I wanted to be finished with it, so I increased the gain (and binning) with lower exposure to have more frames. In the end, the result is a hodgepodge of all sort of frames, and I ended up with quite a lot of data.
In this example, I spent some more time to be extra careful with the stars (by using starnet to get rid of them while I did other things like deconvolution, etc.)
The galaxy itself has a lot of hydrogen nebulus regions (captured with Ha filter), and apparently has far less dark matter than typical. At the scale I imaged it, I couldn't include M82.
© RASC Victoria Centre
Powered by ZENFOLIO User Agreement
Cancel
Continue