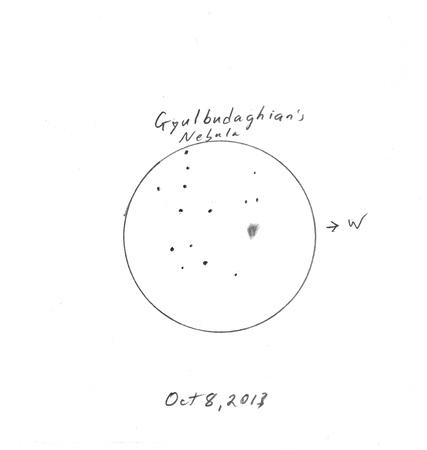 The first challenge is saying the name and the second is finding the nebula. This is a small, faint, variable reflection nebula illuminated by the very young star PV Cephei. It is similar to Hubble's Variable Nebula NGC 2261 only much fainter. It is located about 1.5º due west of NGC 7023 the "Iris Nebula".

This summer it had been noted to have brightened considerably. On Oct 8, 2013 I finally got around to observing it with my f/3.3 20" dobsonian from out at Pearson College. This is a very poor rendition of what I saw at around 320X magnification with my scope. PV Ceph resides at the southern tip of the fan shaped nebula but it could not be seen.