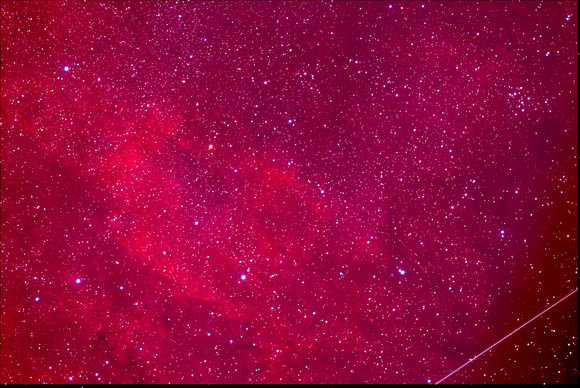 IC1318&M29 in EAA - May 2021
Televue127is/ASI2600MC/LPS multiband filter
Can we find and observe forming stars? Well a good place to look would be a nebula containing lots of hydrogen gas. Hydrogen tends to light up red, due to its dominant Halpha spectral line.
In this image, part of the IC1318 Nebula is shown. This nebula surrounds the star gamma Cygni or Sadre, which is just off the frame. This star is the central star of the Cygnus (or Swan, or Northern Cross) constellation.
The red hydrogen gas is being blown about by interstellar winds forming higher density areas (kind of like clouds in a weather-front?). It is believed that gravity (attraction force) causes the hydrogen to form clumps, which in turn, can attract more hydrogen. If enough hydrogen clumps together and the pressure gets high enough, then fusion ignition takes place and a new star is formed. This star then starts blowing hydrogen away and around to possible form another star.
The actual birth of stars cannot be seen in a single frame, but by comparing multiple frames, taken years apart, to see if there are new stars that didn't exist before.
Sometimes, clusters of stars will form. One bright cluster, termed M29, is apparent in the upper right of the frame. The stars in this cluster appear to form and hour-glass shape and the cluster is bright enough to see in binoculars (close to gamma - Cygni).
This is an example of an EAA image. There has been no processing of this image other than stacking of aligned pictures, and it appears in real time. Flaws, such as the satellite trail and dimming in the lower right would normally be corrected using calibration frames and processing, and the image would have been "enhanced". In EAA, these steps are not performed in order to capture the image "live", with a colour camera.
© davidpayneastrophotos
Powered by ZENFOLIO User Agreement
Cancel
Continue