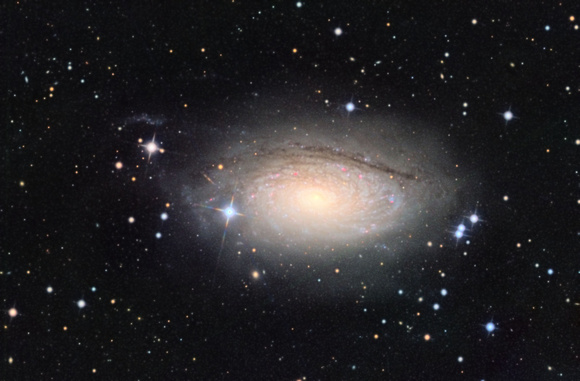 M63 - Sunflower Galaxy - May 2021
CDK12.5, ASI6200MM, LHaRGB
M63 is interesting in its contrast with the M51 and M101 galaxies, in that it is a flocculent spiral, rather than a grand design spiral. Technically the galaxy has two spiral arms, but these arms tench to have gaps and are non-continuous. I imagine that the descripter "flocculent" (a chemical engineering term) was likely chosen as the stars appear to be flocculating in groups within the arms. These flocculated, bright, young stars appear as faint blue patches in the image. Hydrogen alpha emissions were added to the red channel in this image to highlight regions where new stars are being created. These appear as red patches in the galaxy image.
The galaxy is 37 million light-years distant. Several, much more distant galaxies, can also be seen, as discs (or even lines edge-on) or fuzzy ellipses. I am not sure if a satellite galaxy exists above the bright star left of centre. I also, cannot spacially reconcile what appears to be a dark nebula partially obscuring the galaxy below. It seems to cross the galaxy in the foreground and is absent in the lower half.
© davidpayneastrophotos
Powered by ZENFOLIO User Agreement
Cancel
Continue