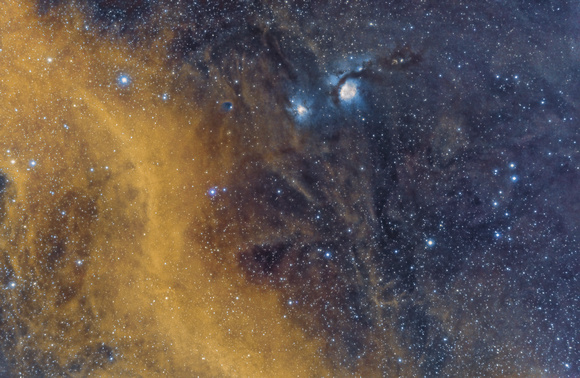 M78 And Bernard's Loop - January 2021
Televue127is/ASI6200MM/RGB+NB(Ha/OIII/SII)
If this image looks dusty, it's because it is - a region of the "Orion Molecular Complex" containing lots of dusts, gases, and stars. The blue "eyes" of what looks to me like a giant flying insect on the right of the image, are actually a reflection of starlight against "dust". This reflection nebula, M78, is the brightest reflection nebula in the sky. The "yellow" band on the left is part of Bernard's loop and is actually emitting light itself. Bernard's loop, an emission nebula, actually extends much further than this image and encircles the entire complex. It is "yellow" due to the use of Narrow band filters for the image, and would appear more red in a broadband colour camera. That's one creepy bug, though.
© davidpayneastrophotos
Powered by ZENFOLIO User Agreement
Cancel
Continue