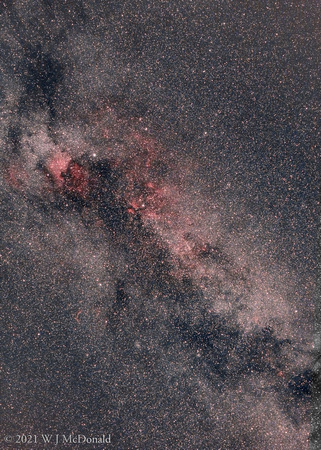 Another image reprocessed in PixInsite. It is from a great night at the RASCALS 2012 Star Party in Metchosen BC. I took light frames using a modified DSLR with and without an H alpha filter and combined them to give this result
Details
2012-08-17 under very clear skies and 18 deg C.
Modified Canon T3i camera with 35mm lens and on HEQ5 mount.
Eight 8min exposures at f/4 and ISO 3200 with a 12nm Ha filter.
Plus Eight 8min exposures at f/4 and ISO 400 without the filter.
8 darks and 4 flats were used for each set to calibrate.
Processing RGB and Ha separately in PixInsite, then combined in Registar. Final adjustments in Photoshop.
2021 W J McDonald
Powered by ZENFOLIO User Agreement
Cancel
Continue