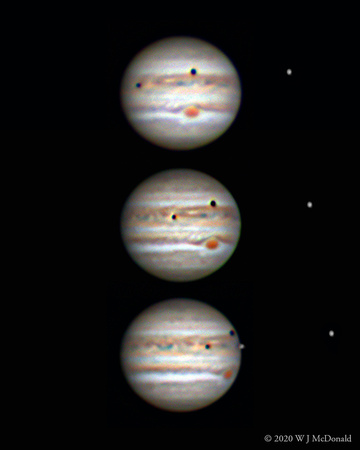 Three of 20 images of the shadows cast by Io and Ganymede on Jupiter during a double shadow event, one near the start, one in the middle and one at the end. Io can just be made out on the upper two images as a white spot between Ganymede's shadow and Jupiter's red spot. In the lower image Io has just left the planet's disk and shows up clearly.
Details
Date 08-04-2020.
8" Edge SCT on AVX mount.
ZWO ASI120MM-S camera with filter wheel and TV Powermate barlow to give focal ration f/25.
Captured 1000 frames in each of R,G and B filters for each color.
The best 30% for each filter were stacked in Astrostakkert. Sharpened in Registax. Winjupos was used to derotate the R,G and B frames before combining to make RGB color images.
Post processing in ACR and Photoshop.
© 2020 W J McDonald
Powered by ZENFOLIO User Agreement
Cancel
Continue