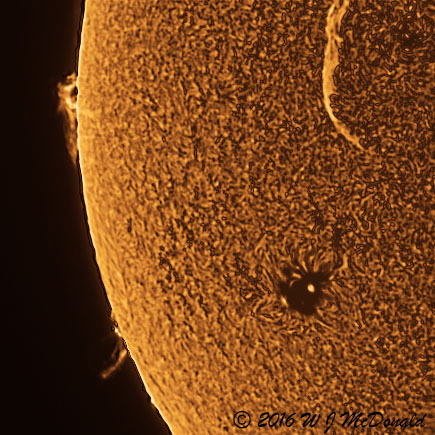 A fairly short lived pair of prominences showed up for long enough to be captured in this image. I used a different processing for this image (see below). It produced a nice result that shows off the surface and prominences quite well. The dark area on th surface is sunspot 2553.
Details
2016-06-12 from backyard in Victoria BC
Clear period with light wind.
ZWO ASI120S Monochrome camera and Lunt 60mm scope with 50mm double stack filter on Celestron Advanced VX mount.
Two video sequences were taken with exposure set for prominences and surface detail respectively.
processed best 200 of 1000 frames in Autostakkert for each and combined the results in photoshop. The surface detail was added with a difference blend that keeps both surface and prominences at their best.
© 2016 W J McDonald
Powered by ZENFOLIO User Agreement
Cancel
Continue