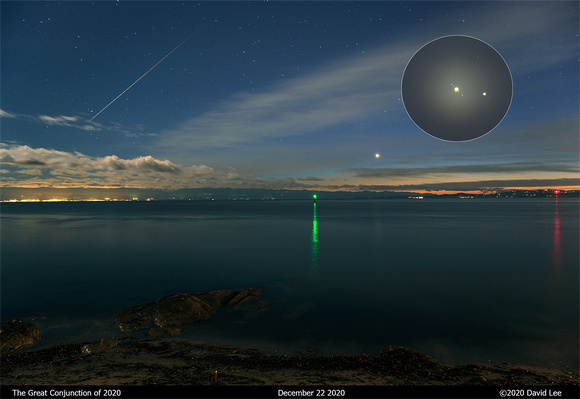 The Great Conjunction of 2020

After cleaning up the mini snowstorm, I made my way down to Dallas Road hoping to see the Great Conjunction, perhaps a day late for the smallest separation but still delightful to see in binoculars.

Tonight the pair were separated by 1/6 of a degree and indeed were very pretty in 8x42 binoculars. Jupiter appeared first and Saturn blinked in and out as dusk progressed.

The landscape shot makes the two planets appear as a bright singular object. This is due to apparent celestial movement as the 30 second exposure exceeded a stationary exposure without tracking. In theory an exposure of 15 to 20 seconds would have been better but I still like the base image as it captured the mood of the event for me.

This inset was a separate tracked image of the planets as they appeared side by side with their satellites.

The meteor streak was a bonus, I'm not sure if it belongs to a particular meteor shower or perhaps a rogue meteor.