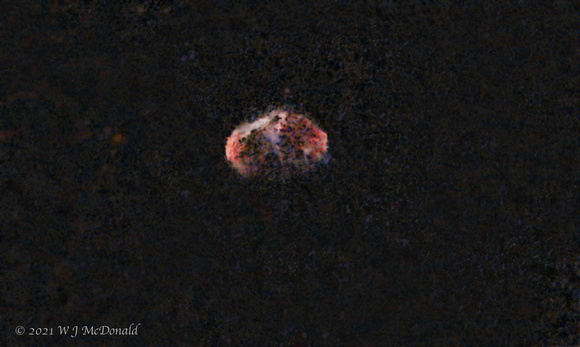 This is a reprocessed and star removed version of an image of the Crescent Nebula that was taken at the Sask Summer Star Party of 2007. I was pretty happy to have captured it as I could not see the nebula visually nor could I really make it out on the camera display.
Details
Date and Location – 2007-08-11; Cypress Hills at the Saskatchewan Summer Star Party.
Equipment – Williams 105mm with modified Canon 350D on HEQ5 mount.
Exposures – 66 light and 29 dark frames at 58 sec and ISO 1600. In addition, 25 flats were used in the calibration.
Processing – Alignment, stacking and digital development in ImagesPlus, then enhancement in PixInsite Photoshop.
© 2012 W J McDonald
Powered by ZENFOLIO User Agreement
Cancel
Continue