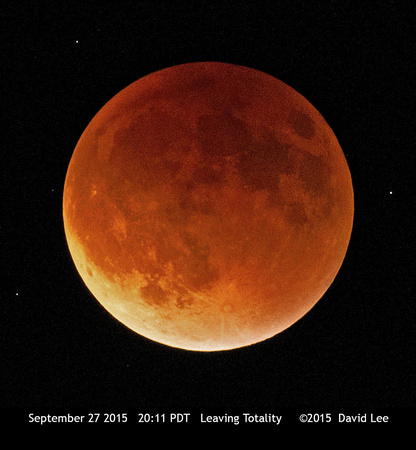 It was a perfect setting for what was billed as the blood red Super Moon lunar eclipse. On a parking lot at the HIA/DAO a crowd had gathered to witness the spectacle.

Everyone was speculating where on the horizon line it would first appear. I think Chuck Filtness spotted it first, a thin sliver of light straining to be seen in the still bright sky. As totality progressed the Moon disappeared until darkness came revealing a beautiful orange globe.

As I captured frames I noticed the appearance of stars close to the Moon. In fact I was able to watch a star emerge from the lunar limb.

This image was captured approximately 12 minutes before totality ended, when the Moon leaves the umbra, the darkest part of the shadow. As totality ended the lower limb brightened, a beautiful contrast to the still reddy orange Moon.