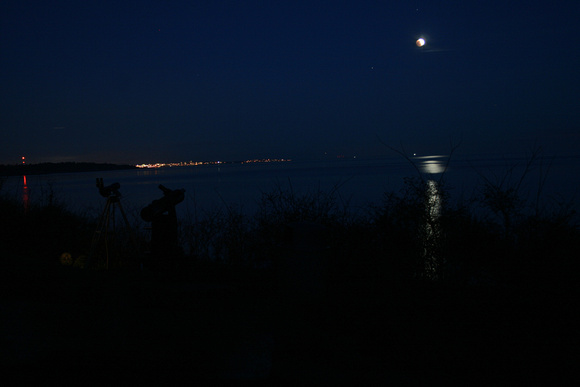 The view from Metchosin

Last nights eclipse experience couldn’t have gone better if I had planned it. I had hoped to be at the beach before Moonrise but circumstances prevented it. I pulled into the little parking lot shortly after 1800hrsPST. The scene that greeted me when I got out of my truck was pure magic. With the skyline of Victoria off to the east, the Moon with a large bite out of it hovering above, and the Olympic Mountains off to the south across the waters of the Strait of Juan de Fuca that was awash in the glow of the Moonlight, I just knew that this night would be special.

On the little outcrop over looking the beach I set up my little ED 80 refractor, 6 inch dob and 10 X 50 Binoculars (on a parallelogram mount), then lay in wait for any passers by. I didn’t have long to wait as this is the place that many in my community go to, to witness such events.

Over the next few hours maybe around 50 people came by. Around totality the place was in a state of total controlled chaos. I was so impressed with the behavior of everyone. Friends and strangers milled about trading views through the various optics, as children of all ages laughed screamed and played about totally excited with the whole situation. Eventually the 6-inch dob was trained on Saturn and everyone wanted a look at it.

During totality the sky filled with stars and many DSOs were visible naked eye. Using the refractor I showed people many DSO. This location is actually quite a good location for observing in general and I wish I taken out my SQM to get a reading at mid totality. I have a good idea though of how dark it was. At one point during a naked eye tour of the sky I was looking in the general direction of the west when I noticed the Pyramid of the Zodiacal Light clearly evident. Showing the general public it was probably the highlight of my night. Then again, it might have been the three yr old girl who was trying to describe to me what she saw while she was looking at Saturn. “It is this ball with these thingies sticking out of it and is floating and it looks so pretty” Her little hands were making all these gestures trying to create a picture. The look of pride on her parents’ faces remains emblazoned in my brain.

The low point came right at the end. It was around 2100hrs and everyone had gone and I was slowly loading all of my gear into my truck, basking in the glow of an evening well spent. A car drove down the road, parked and a man holding binoculars got out. He looked at me and said, “I expected to see more people”. I informed him that there was but they had all gone because the eclipse was essentially over. He responded with, “then the man on NPR must have been wrong because he said it would be starting a 8:30”. My response was, “ I guess that would all depend on where NPR was broadcasting from”. I felt sorry for this man as I drove away leaving him scanning the ever-brightening sky with his binoculars.

This photo was taken shortly after arriving at the beach and was set up. Seeing as the camera tripod was in use I had to balance the camera on the top of a fence post of an adjacent sheep pasture.
© RASC Victoria Centre
Powered by ZENFOLIO User Agreement
Cancel
Continue