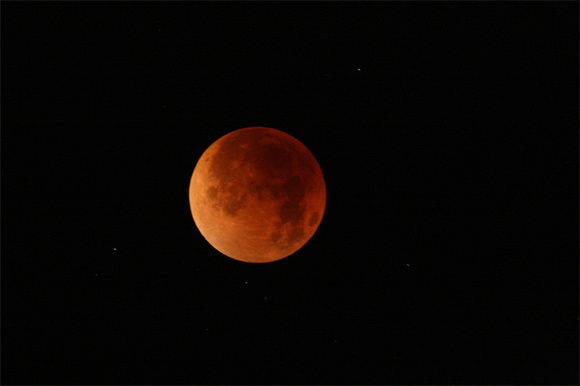 I observed the whole event from beside the riding ring, out here in Metchosin. I was listening to late night talk radio from San Francisco and people kept phoning in their reports of observing the eclipse. It was almost like I wasn't observing alone. The same thing went on a couple of weeks ago during the Perseids. Only on that occasion the calls might be punctuated by oohs and wows as a particularly good one went by.

Anyway, back to last night. At totality it was so dark that the Milky way was clearly evident spanning the sky. With my 6 inch dob and the low power eyepiece that I was using to observe the eclipse I could make out both east and west sides of the Veil Nebula with the assistance of an OIII filter.

I also used my son's new Rebel XTi attached to my 80mm Zenithstar to take images. I took one about every 5-10 minutes. If I knew what I was doing I could probably string them together into one continuous movie kind of thing.
I couldn't get about the last 10 minutes as my objective was totally fogged over. Here is my uncropped shot of totality. I know the stars in it are a bit elongated but that's because I was using a non tracking mount. I left it uncropped to show how faint stars were clearly eveident right up to beside the Moon. With the 6 inch dob there were many stars in the field with the Moon. I know the focus is a bit soft but I had taken the camera off to do some wide field shots with just a camera lens and couldn't quite get it right again. I'm just working out the bugs on how to use a digital camera.
© RASC Victoria Centre
Powered by ZENFOLIO User Agreement
Cancel
Continue