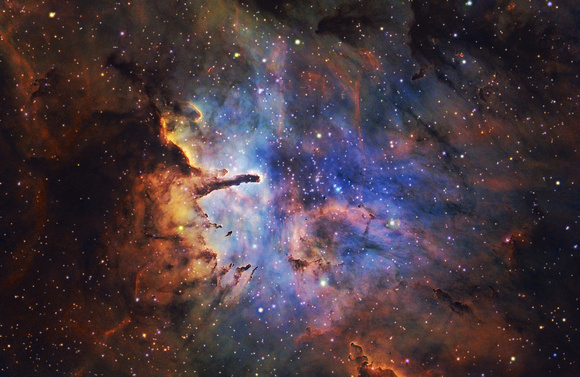 The LBN135 Nebular structure (Vulpecula) is similar to those of the more well-known Rosette and Heart Nebulae. At some point gas and dust gravitated together in a stellar nursery resulting in the creation of a stellar cluster. Radiation from these new stars then blows away remaining material roughly spherically away from the cluster centre. Despite having no mass, photons of radiation do carry momentum and will exert a pressure against something it hits. The response of the material being mobilized will depend on its mass and the cross sectional area it presents to the radiation, so a naturally occurring, "separation operation" takes place resulting in the variation of colour seen in this image. "Fingers" and "droplets" of material may resist displacement resulting in shapes very much like the "Pillars of Creation" seen in images of the Eagle Nebula and many others. I enjoy looking at them, as they remind me of the viscous fingers that occur in porous media flow, when a lower viscosity fluid is displacing a more viscous one. This also contributes to the uneven expansion of the material outward.
I couldn't find a name for this nebula, so I dubbed it "Trillium", as the shape looks like the Provincial flower of Ontario (only Trilliums are white).
There is a bit of a saga on this image. My mount got ill while I was collecting data - the brains need fixing. Nice thing about my Astro-physics mount, is that the CP4 controller can be detached and quickly sent for repair. Astro-physics technical support has been great, just have to wait for the controller to go to Illinois, get repaired, and come back.
However, my mind became pre-occupied with the mount, and I forgot to cool my camera on one of the nights. What a difference T=+26C makes from T=-10! This made processing a challenge for me too. I wasn't aggressive enough on the cosmetic correction to remove hot pixels, which when dither integrated become 2 to 4 pixels wide, which are in turn recognized as stars! Not good when you want to transfer RGB stars to a starless SHO image. If you zoom in, you can see a few of these false stars in the background. So please don't zoom in too much! :-)
© davidpayneastrophotos
Powered by ZENFOLIO User Agreement
Cancel
Continue