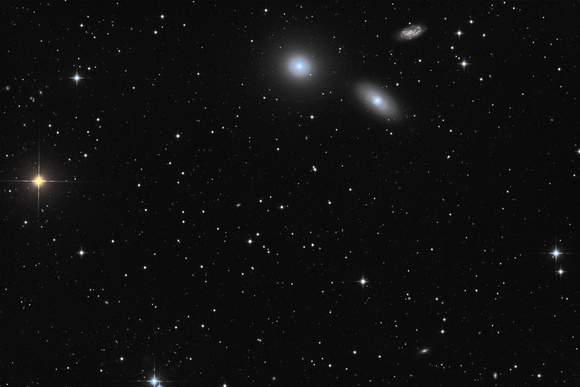 This view of the galaxies of Leo started out as a planning mistake, resulting in planning of two targets in one night and no willingness to get up in the middle of the night to manually rotate a camera. This resulted in the "poor" framing and the camera oriented along the ecliptic.

Despite this, I think the blue of the two ecliptic galaxies (M105 and NGC 3384) is nicely offset by the pale red of the odd, spiral galaxy, NGC 3389 and by the bright yellow star on the LHS. In addition, this view of Leo also provides for great, endless galaxy hunting, much as with Martin's recent image of the Needle Galaxy.

As it turns out, NGC 3384 was photo-bombed by an asteroid - that I noticed by both blinking my images (going through the individual images as a video) and by looking at my "rejected" high pixels from the image integration. Since the asteroid was forcably removed from the image, you will not see it here, so I included it as an add-on to this image.
Of course, I stretched this image with the GHS script (including some colour enhancement) and there is a bit of a write-up on it in the May issue of SkyNews.
Hope you enjoy, and check out the video.
© RASC Victoria Centre
Powered by ZENFOLIO User Agreement
Cancel
Continue