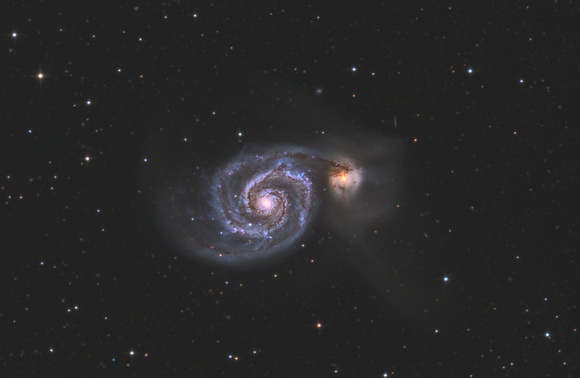 M51 - Whirlpool Galaxy, Apr 2021
Planewave CDK11/ASI2600MC/no filter
On just about the anniversary of my original posting of M51, I decided to reprocess with a update to my skill level, and the use of the GHS script to control the background details, and at the same time control the bright areas. I also deconvolved this (and other non-linear processes) starless to avoid artifacts such as ringing.
Due to a lack of total integration time and I didn't apply Mure denoise, I was a little too heavy handed on the background noise reduction.
Other than that, please compare this with my year-old skill levels.

This image is actually of two galaxies that appear to touch, but the one on the left (M51) is closer than the one on the right (NGC5195). Although their gaseous atmospheres are connected, the irregular shape points to a more intimate interaction in the past. M51 is pegged at 23 million light years distant. Several other, even more distant galaxies can be found in the image, appearing as discs, or fuzzy stars - a couple even have spiral arms.
© RASC Victoria Centre
Powered by ZENFOLIO User Agreement
Cancel
Continue