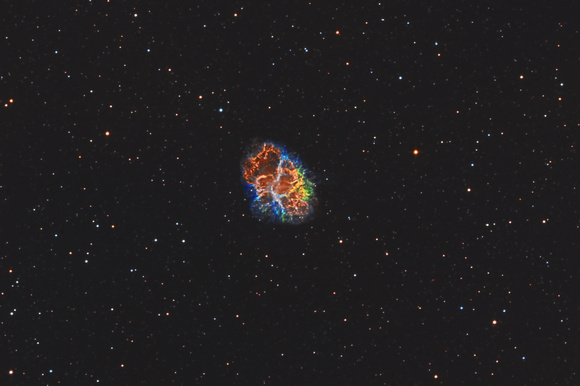 M1 - Raw CrabM1 (The Crab Nebula) - Feb 2022
Planwave CDK 12.5 - AIS6200MM
A-P 1100 GTO AE, Antlia Pro 3nm NB filters
HSO (3 x 12(16) x 900s exposures) = 12 hours int time (3 nights)
M1, The Crab Nebula in Taurus, is the bright super-nova remnant in the sky. The supernova that created it detonated in 1054, as noted by Chinese astronomers, and continues to expand at a rate of 0.2 seconds per year. At its centre is a neutron star (not visible) that lights up the nebula with gamma and X-rays and is actually the brightest source of this radiation in the sky as well.
M1 is also notable as the first entry in Messier's list of "not-comets".
The colours in M1 are representative of the composition of elements/ions in the nebula, with hydrogen assigned red, oxygen ions assigned blue, and sulphur ions assigned green. Other colours represent mixtures of these substances. Colour enhancement was provided by v2 of the GHS script, which enhances colours using the same methodology as the Arcsinh script in Pixinsight..

There WAS a definite halo of brightness around M1, and halo around that of darkness. This effect I put down to a combination of the light fog/high cloud that existed on the winter nights, together with the fact that a half moon was very close to M1 when the images were shot. No effort was made to hide this effect.
With this new revision, I managed to remove the halo - it was an artifact of my use of Adaptive Normalization. It was not generated with NSG in Pixinsight, so I went with that. Other changes - using the SHO Hubble Pallette, deconvolving the data + HDMRT + LHE starless, and finally using more natural HOO stars (with some star colour calibration and adjustment).
© RASC Victoria Centre
Powered by ZENFOLIO User Agreement
Cancel
Continue