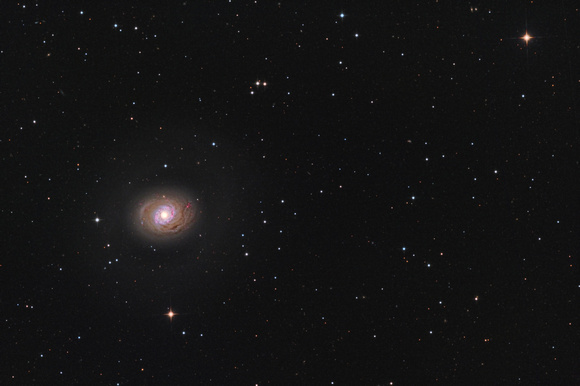 I thought I'd go for one of the smaller Messier objects, and this one turned out to be very interesting to boot. Apparently the gases in this galaxy in Canes Venatici and despite it's size, is the closest galaxy to us, outside of our local group.
I see the structure as consisting of 3 rings. An innermost, rather conventional looking ring, but with many starforming (pink hydrogren alpha regions), where star formation is occuring and blue areas of young stars. I think this is rare to have these so close to the core. The middle ring is a more rusty, colour with dust lanes and even more intense Ha areas. The outermost "atmosphere" goes through a minimum in the radial direction, intensifying further out and finally fading into the background. At first I wondered if this was an acquisition or processing artifact, but no, it is there in most images and is what help gives the galaxy the appearance of being a crocodile's eye or, even more sinisterly "Eye of Mordor". The minimum, is apparently set up by the resonance frequency of the turning spiral arms.
The galaxy is also classified as a LINER (low ionizing nuclear emission rutabaga?), having a low or weakly ionized astmosphere,, but I have not yet found an explanation for this. The inner ring is apparently a "pseudo-bulge", but again I don't really see a bulge at at, and perhaps this is why it is a pseudobulge. Finally, a big controversy with this galaxy is that it contains very little dark matter which lies in apparent contradiction with the notion that it is actually required to form the galaxy itself.

I am very glad I used my NB Ha filter on this object to reveal the star forming areas. Also, some tiny, but interesting background galaxies and in the image.
© RASC Victoria Centre
Powered by ZENFOLIO User Agreement
Cancel
Continue