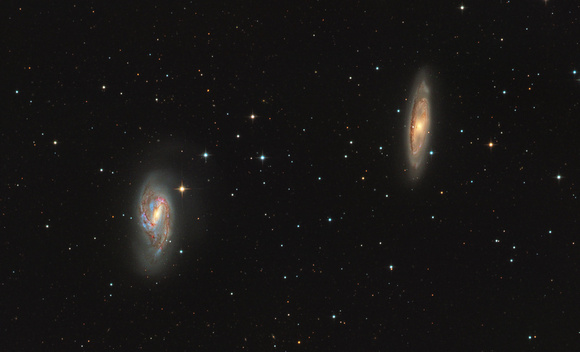 Alternate Title "A Tale of Two Galaxies" a la Dickens, or "The Two Leo Triplets" a la Snicket.
Both Leo Galaxies are Spiral, about the same projected size and brightness. However, the similarities end there. M65, upper right, is orderly, more or less monochromatic. M66 has a widely errant "atmosphere", and very distinguishable Hydrogen nebulosity regions (red), new star clusters (blue) and more well defined, but en-echelon dust lanes. Although M65 is viewed more edge on, I will have to do some reading to find out why we think these galaxies look so much different. Both glaxies are listed as 35 million l.y away. Small galaxies also abound in the image.
The third of the triplet of galaxies is NGC3628, shown elsewhere, appears edge on. The difference in all three has been attributed to their gravitational interactions.
This image was processed in Pixinsight, calibrated and stacked via the NSG script for normalization, and noise reduced using the Mure Denoise application. The lum channel underwent deconvolution and LHE. All channels were stretched and colour enhanced using the GHS script - this left a little colour artifact in few of the brightest stars that was left alone. A restretch of saturation would likely avoid this. ACDNR was applied to the image at the end.
© RASC Victoria Centre
Powered by ZENFOLIO User Agreement
Cancel
Continue