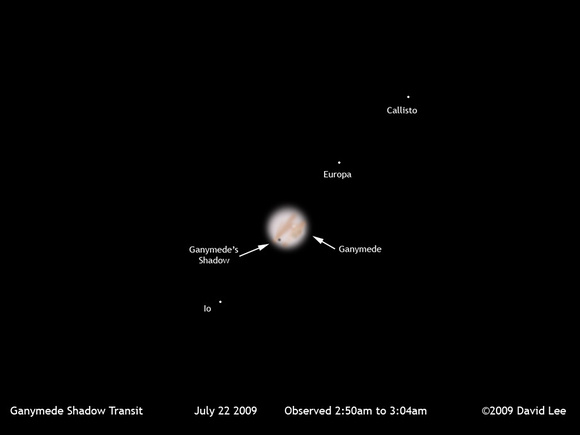 Early this morning I woke up around 2:40am, it must have been thoughts of getting a glance at a visible collision on Jupiter. Not having planned on this I just grabbed my Pronto and set it up on a tripod. I had remembered in the mid '90s when Shoemaker-Levy crashed in to the giant gas planet that the views from Earth were just on the verge of perception so I wasn't that hopeful.

Much to my surprise I could clearly see a sharp round shadow on the face of the planet. Obviously not the crash zone but a shadow transit of the moon Ganymede. I looked around and I could see the GRS (Great Red Spot) and a slight brightening nearby. I found out later this was Ganymede itself.


Wanting to go back to bed I didn't want to get the rest of the imaging gear out so I grabbed a piece of paper to sketch what I saw and later translated this to an illustration that I created with Photoshop.