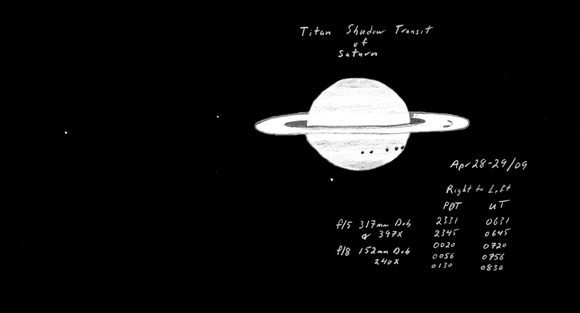 Late in the evening of April 28/09 I had the opportunity to watch a second Tiatan shadow transit. The conditions were far from ideal with a very light haze and less than optimum seeing.

I set up both my 12.5" and 6" dobs to observe the event. I had brought out the 6" also, because my yard has very tall trees to the west and I wanted to have some mobility to maneuver views. I wanted the bigger scope for better resolution. In reality I should have gone to a close by better location but I was being lazy.

I picked up the first sighting of the shadow on the limb of the planet at just 0631 UT as an indentation on the edge. It reminded me of the begining of the transit of Mercury a few years back.

With the fluctuations in seeing, variable transparency and tree blockage, I managed to observe almost half of the transit. I marked dots at 5 locations for where the shadow fell. Where I placed the Moons is where they were, when I first spotted the shadow.

This observation was one of the highlights of my observing life, seeing as 50 years ago on April 29th, my own shadow began to fall on this planet.