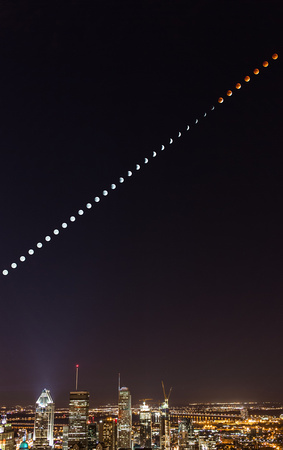 The weather in Montreal this September was great and the forecast for the lunar eclipse were encouraging. I headed to the summit of Mont-Royal and arrived after the moonrise. Using a 40mm lens I decided to attempt something new: a multiple exposure picture of the eclipse. The lookout summit was jam-packed with enthusiast lunar observers. At about 22:10 EST, the time of total eclipse, the crowd erupted in cheers. This image is comprised of thirty-three separate images taken with a five-minute interval that were combined using Photoshop.
Date: September 27, 2015
Location: Mont-Royal, Montreal, Qc
Optics: Canon EF 40mm f/2.8 STM
Camera: Canon EOS 5D Mark III
Exposures: 33 images of 1/2000 sec to 4 sec, f/4.0, ISO 200.
© RASC Victoria Centre
Powered by ZENFOLIO User Agreement
Cancel
Continue